Soooooooooo i finally finished the painting that has had me trapped for some 3 months.... what a horror show it turned out to be..... it is finally finished. Why is it some paintings just won't END!? I am sure it is something that happens to other people now and again by this was the most extreme case that ever happened to me. Many hours later and it is complete. 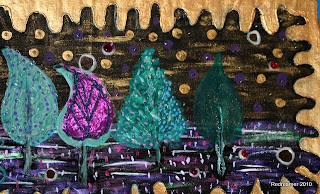 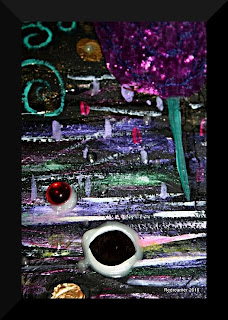 Some details and a full shot... it is incredibly hard to photograph dimensions wise as it doesn't like to be framed by the camera! but it is 36 x 12 inches x 3 inches..... box canvas.
Redreamed by Redreamer No comments:

Where to start? Mostly it starts with Hubris. from there spirals into one of the most destructive criminal acts directed at the natural world.It appears to be  beyond  our current ability to fix it.

There is no going back.

On a visceral level it is an outrage and the beginning of events we cannot in any way control or even imagine the long and short term effects and will continue to grow as time passes. And the solution? to add more poisons to the oceans! What is it about closed loops BP doesn't understand?

On a personal level I think that fire monkeys have gone way too far and i see this as a dire situation. I wonder where this will end?

A blogger doing a great job deconstructing and discussing the Live Cam of the ROV in the gulf.

The Ongoing discussion at LATOC

So we have been working on a few jobs around the home dependent on the weather at the time as it has been typically all over the place from cold to hot and wet. So FIRST THING i tend to do is check the weather to see what to expect and see if it is an inside or outside job kind of day.

This has meant three different projects running at the same time.... not to mention the fact our chickens have been sick with a contagious bronchitis and we have lost so far three to the infection despite our best efforts. Been quite the learning curve... mostly introducing a new member to the flock needs to be rethought as that is how we developed the problem in the first instance. One of the chickens bought at auction was obviously infected and before we knew it..... we had an entire coup of chickens sick!

Identifying what was wrong was the primary concern from there it was a question of separating out the sickest animals for special attention.

Headed out to Grisamore Farm for plants for the vegetable garden and while there we met a cute little lamb that posed for the camera.

Redreamed by Redreamer No comments:

What was i thinking..... preparing for spring in the garden and getting things ready to plant....... unfortunately our spring has been unusually cold and we even had snow on Mothers Day!

The keyhole design by Drew and Jye...... the straw is the pathways for the vegetable garden this minimizes soil compaction and allows greater access to the growing sections..... keyhole design principals and it LOOKS GREAT too!

The boys and I made this garden art from an old clock and some glass beads and pebbles.... it was fun!Part of our homeschooling activities......

More to come.......
Redreamed by Redreamer No comments: